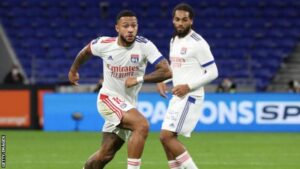 FC Barcelona and Memphis Depay have reached an agreement for the player to join the club once his contract with Olympique Lyonnais is at an end.  The player will sign a contract until the end of the 2022/23 season.

Memphis a born of Netherlands and Lyon’s forward has agreed to join FC Barcelona. Depay has scored 58 goals in 144 games since he joined the club from Manchester United in 2017.

While at Manchester United, Memphis Depay scored only seven (7) goals in 53 matches in manchester’s legendary Jersey No. 7. This was for Depay in the premier league after being signed by his compatriot Louis van Gaal for £31m in 2015.