Virgil van Dijk will play no part in Euro 2020 for the Netherlands thanks to a serious knee injury he sustained while playing for Liverpool in October 2020.

There had been some hope that the Dutch captain would be available for the Oranje, particularly when he shared footage of himself making positive strides in his rehabilitation. However, the centre-back confirmed in May 2021 that he would not take part in the tournament.

“I think the decision to not go is the right decision in the grand scheme of things. It’s tough, but I’m at peace with it.” 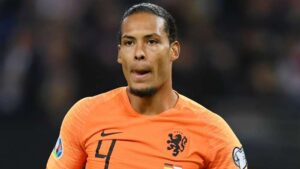 Luis Enrique’s Spain will not be able to rely on the precocious ability of Barcelona forward Ansu Fati after the teenager had to undergo surgery again in May.

Leicester City forward Harvey Barnes had been hopeful of sneaking into Gareth Southgate’s England squad, but will not be included after suffering a set-back in his rehabilitation from a knee injury.

Joe Gomez is another absentee for the Three Lions, but is making progress in his recovery from a knee tendon tear.

Barcelona goalkeeper Marc-Andre ter Stegen has been ruled out of Germany’s Euro 2020 panel due to a knee injury and Joachim Low’s side will also be without Marco Reus with the Borussia Dortmund forward opting to rest.

England could well be without the influential presence of Liverpool captain Jordan Henderson at Euro 2020, with a groin injury ruling the midfielder out for the rest of the season.

Another huge character in the England camp who is a major doubt is Harry Maguire, who suffered a foot injury towards the end of the Premier League campaign. Manchester United boss Ole Gunnar Solskjaer has hinted that the defender could be available for the Europa League final on May 26 though.